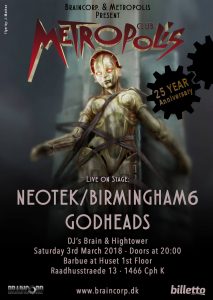 We are pleased to announce that we’ll be performing in Copenhagen this summer at a fund-raising event to support Kurt and Claus of Leæther Strip who are struggling with heavy expenses to medicine.

Aside from us, Slagskygge, Ras Bolding and Leæther Strip will be on stage during the evening.

If you are not able to show up but wish to make a donation, you have the following options:

PayPal to leather_strip@vip.cybercity.dk
MobilePay (Denmark only) to 22791167

Please make sure to add the message “KURT” to your donation.

We will return to one of our favorite venues – Kulturmaskinen – for a gig in Odense next Friday. Expect noise!

On Saturday 10. 10. 2015 we will play a (short?) concert as part of this year’s ‘Tribute’ show in Musikcaféen, Copenhagen. The tribute theme this year is Halloween, so we’ve put together a short set of Ghost Rider songs. After this set we will play a couple of songs from our own back catalog as well as some famous Birmingham 6 tracks which we have integrated into our repertoire.

This is one of the few chances you will have to hear new songs from our end – even if we did not actually write these songs ourselves.

We’re looking much forward, once again to play at the beautiful Nakkefestival in the Vig area of Northern Zealand. We will be playing Friday evening 24 Juli.

Once again we will be shaking the walls of “Lygten 2” – just next to Nørrebro Station in Copenhagen.

It takes place on 7 February, doors open at 9 p.m.

Looking forward to seeing you all there! 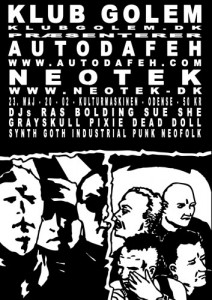 We’ll be there together with the Swedish old-school EBM act AUTODAFEH, so this is going to be one kick-ass night to remember!

Since I’ve been asked more than once, I decided to write up a small article about our live setup.

Our key component in the setup is the Mac Book Pro. On this we run Apple Mainstage, in which we have a Patch for each of the songs we play.

Mainstage runs backing tracks in the “Playback” wave file player, and these are started remotely from an attached MIDI keyboard (currently a Novation ReMote 37 SL). The same keyboard is used to select the ‘Next’ patch between each song.

Mainstage also hosts all the softsynths, samplers and amp simulators as well as tempo-synced delays – primarily used for vocals. Many parameters are tweaked in real time using MIDI control messages from the attached keyboards and the Native Instruments Maschine controller.

Audio signals in and out of the computer are handled by the Motu 8Pre audio interface. Since this particular model only has 2 analog outputs, we’ve also attached a Behringer ADA8000 ADAT AD/DA converter, effectively giving us 8 additional in/out, allowing us to make separate monitor mixes to each of us – although we do not make much use of this at the moment.

We are using two MIDI keyboards and a Maschine controller. We use ES2 and EXS24 from Apple as well as Maschine, Kontakt, Battery and Massive from Native Instruments. For delays we’ve used the Tape Delay by Apple, but are expecting to replace this before our next gig with something else (probably Rubbadub from ++audio).

Guitar and bass are processed using Guitar Rig from Native Instruments. Our mostly used electric bass of is the Epiphone Thunderbird series.

All vocals as well as anything else you see us perform are in fact performed live – we do not appreciate ‘miming’. 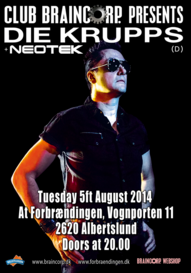 It is with great pleasure that we can announce ourselves as the supporting act for Die Krupps when they visit the venue Forbrændingen on 5 August.

We have already begun preparations, and expect to be able to play some brand new material at this event.

For the first time in three years we will be performing in our hometown.

It will be a truly energetic show featuring not only classics from our own back catalogue, but also a few Birmingham 6 tracks.

The event is hosted by our long time friend, Brian of Club Braincorp.